“Music washes away from the soul the dust of everyday life.” Berthold Auerbach

Welcome to the journey. I’ll post information about composer study, composers, and music in general here. I’ve chosen this medium so that I can post photos, portraits, music, and links to other sites that are phenomenal at explaining something about music or telling the story of a composer’s life and work. We won’t begin at the beginning, but since it’s 2015 and Ambleside Online has chosen Palestrina, Brahms, and Schubert for their study this fall, I will share lots of juicy tidbits about these three on this blog.

When I first began studying Giovanni Pierluigi, for that is his name, he did not seem spectacular, and his music all sounded the same to me. He wrote sacred music and madrigals and lived during the Renaissance in Italy. He lived in the city of Palestrina, and he became so famous that his city became synonymous with his fame and he was eventually just called Palestrina. This is what Palestrina, Italy looks like. 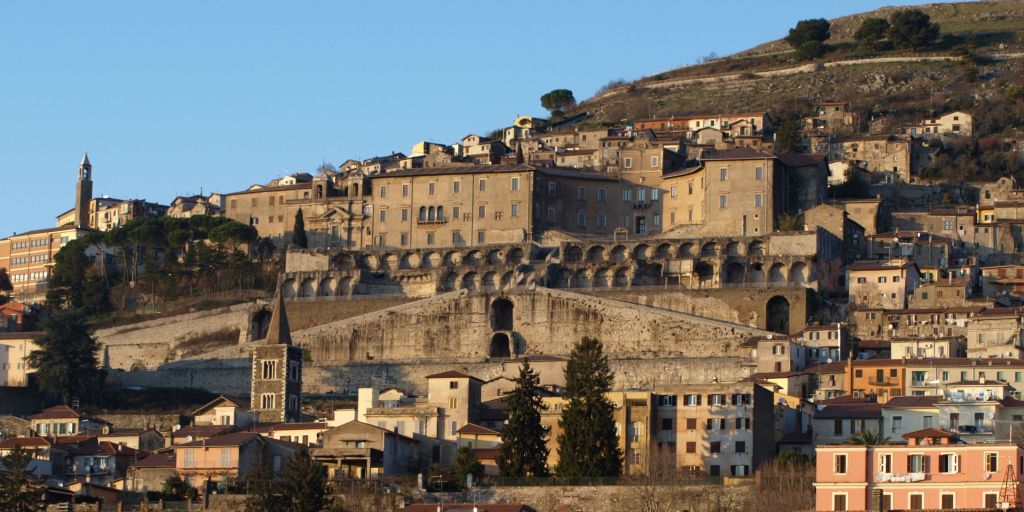 You have to understand what was happening during Palestrina’s time — the Protestants were changing the liturgy of the church and writing hymns to the music of drinking songs so that ordinary men and women might be more comfortable singing to the glory of God. It was a noble concept, but most Catholics were horrified by the idea. Common drinking songs? Sung boisterously to God inside His holy sanctuary? No! Palestrina was commissioned to write sacred music specifically for the church, and it was not to sound anything like a bar song. It must be lilting and beautiful, hauntingly solemn and glorious. He lived during a time when new melodic and harmonic ideas were beginning to spring up, so his work has a polyphonic feel to it. Polyphonic means “many voices.” Palestrina’s music has many different melodic lines to it, but they all sound beautiful together because they all fit into the appropriate harmonies we’re all familiar with. Here is a sample:

Palestrina was organist and choir master at the Sistine Chapel and at St. Peter’s. He wrote over a hundred mass settings and over two hundred motets. At the same time, he managed a very successful furrier business. He could sell you a fur cape or shawl and write you a song, too. His fur business was highly profitable, so he was an extremely wealthy man.

In Palestrina’s music, each voice part resembles a chant melody. In the opening Kyrie from Palestrina’s most famous work, the Pope Marcellus Mass (above), you can hear the classic, pure lines of the text set clearly amidst the various voices of the choir. Palestrina’s polyphonic writing is of such quality that many later composers (including Mozart, Beethoven, and Brahms) spent their early years studying counterpoint in the “Palestrina style” as set down in a famous textbook by J. J. Fux in 1725.

On this map, Palestrina is the red star. See how close to Rome it is?

Here are some musical terms you may want to teach your children about while studying the music of Palestrina:

Madrigal – a complex, polyphonic unaccompanied vocal piece based on a secular text

Agnus Dei – “Lamb of God,” a liturgical prayer addressed to Christ as the lamb of God.

Kyrie – a short liturgical prayer often set to music that begins with the words “Lord, have mercy.”

Counterpoint – one or more independent melodies added above or below a given melody.

Mass – the Catholic church service, at which the sacrament of the Eucharist is celebrated.

Ordinary Consistory – a formal meeting of the College of Cardinals convoked and presided over by the Supreme Pontiff for the creation of new cardinals and to vote on canonization of saints.

Palestrina wrote madrigals early in his career. Here is what wiki had to say about that:

“…His attitude toward madrigals was somewhat enigmatic: whereas in the preface to his collection of Canticum canticorum (Song of Songs) motets (1584) he renounced the setting of profane texts, only two years later he was back in print with Book II of his secular madrigals (some of these being among the finest compositions in the medium). He published just two collections of madrigals with profane texts, one in 1555 and another in 1586. The other two collections were spiritual madrigals, a genre beloved by the proponents of the Counter-Reformation.”

Palestrina later repudiated madrigals. He even tried to write some sacred ones to make up for those early pieces he wrote that did not have sacred texts to them. But alas! The madrigals survived! Here is a clip — and honestly, other than being a little faster in tempo and lighter in tone, I really can’t tell the difference between his sacred and profane music since I don’t know enough Italian to understand what they’re saying.

According to J J Fux, Palestrina had established and followed these basic guidelines for his music:

To learn more about Charlotte Mason’s living educational principles and how to apply them to music study, I hope you will consider purchasing my book, A Touch of the Infinite.