You can’t possibly hear the last movement of Beethoven’s Seventh and go slow. — Oscar Levant, explaining his way out of a speeding ticket

but also lived and performed in Vienna, Austria-Hungary

Johannes Brahms was a German Lutheran who was known for his long beard, cigar, and highly dramatic music. But he was quite a different man in his youth. Brahms was very short at age 20. He had blonde hair, had a high voice like a 12 year old, and  girls didn’t take him seriously until his voice finally changed when he was 24 years old. Can you imagine the teasing he must have endured? His beard finally grew in when he was in his mid 30s. He wore a beard at middle age because he couldn’t when he was young. It was a badge of honor for him.

Brahms was a very private person and was very critical of his own work. He once said, “It’s not hard to compose, but it’s very hard to let the extra notes fall under the table.” He struggled with what to let go and at one point burned 20 string quartets in a furnace because he thought they weren’t good enough. I wish we still had them today! He also burned all of his receipts and letters, which is why we know so little about him. He kept no journals, gave few interviews, and left no autobiography. Fortunately for us, we have a few of the letters he wrote to Clara Schumann. And frankly, they are a little juicy!

Here is the backdrop for Brahms’ relationship with Clara. You may remember that Clara Schumann was married to another famous composer, Robert Schumann, whose work is still performed today. Robert became ill while still very young, in his early thirties. He threw himself over a bridge in an unsuccessful suicide attempt. He was institutionalized for the next three years, where he eventually died. Clara was not allowed to see him while he was in the hospital because they feared he would become too agitated. She was grief-stricken and begged others to let her know how he was faring. The news was never good.

He was much younger than Clara Schumann. In fact, when Robert was hospitalized, Brahms served as a babysitter and house boy to the family while Clara was off performing. He was in love with her. There was no doubt about that. But the age difference was a problem for both of them. Clara was 35 when her husband jumped off the bridge. Brahms was 21. Still, the letters he wrote to her showed genuine affection, and they were lifelong companions after Robert died.

‘Take my letters,’ Brahms said, ‘as the innermost caresses of my soul. I love you too much to be able to write it down to you.’ ‘How empty and barren all is when you are not there! I think of you endlessly, with the most burning love… How sorry I would be if I did not have you!’

‘I would love to be able to write so delicately about how much I love you, and I love you as much as I can put in words… you, my love, you my divine Clara!’

Here are a few more of his letters. I imagine he would have been so embarrassed to know they survived after he burned all of his own personal papers, but he couldn’t burn Clara’s!

June, 1855: My dearly Beloved Clara, I can no longer exist without you . . . please go on loving me as I shall go on loving you, always and forever.

Clara’s daughter Eugenie said of her mother, “She said she could never have borne her sorrows without the efforts of friends like Brahms. It was Brahms whose genius lent mama wings to soar.”

Johannes Brahms was rich and famous during his lifetime. His first symphony was so famous that it became known as Beethoven’s tenth. He was under intense pressure and scrutiny because he was so famous. He was also difficult to get along with, which may or may not have been because of this intense pressure to perform.

Brahms had no children of his own and never married. He loved playing with toy soldiers, had frogs for pets, once conducted an outdoor concert standing in a tree, adored coffee (Viennese roast), had migraines, and was nearsighted.

Dislikes: autograph hunters, having his picture taken, the English, aristocratic conceit, dentists (he lost all his teeth and had to wear dentures.) 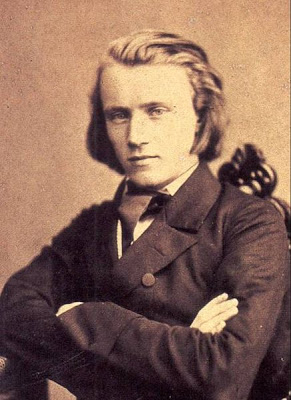 Brahms refused to wear a tie unless he absolutely had to. He loved to go on long walks, frequently ate French sardines — beginning by slurping down the oil before scarfing down the fish, cut his pants off four inches above the ankle for comfort, and never forgot his humble roots. He dressed poorly in reaction to his success and the high society where he found himself.

In the Summer of 1885, a fire broke out in a nearby work room. He rushed to the scene and was part of the bucket brigade. Even though the fire was inching toward his own apartment, he didn’t leave the bucket line. A friend grabbed the keys from his pocket and rescued his symphonies because he felt the poor people needed his help more. Then he paid to rebuild the workshop where the fire began. Brahms was kind and caring, even though his demeanor was prickly and harsh.

Brahms used his fame and influence to publish works by lesser known composers, He rescued Dvorak from the poorhouse by insisting on the publishing of his Slavonic dances. While he sewed patches on the elbows of his jacket to avoid buying new clothes, he insisted that Dvorak consider Brahms’ fortune his own.

“There is no real creating without hard work. That which you would call invention, that is to say, a thought, an idea, is simply an inspiration from above, for which I am not responsible, which is no merit of mine. Yet it is a present, a gift, which I ought even to despise until I have made it my own by right of hard work.”

and in advising a young composer:

“It seems to me you are too easily satisfied. … Let it rest, let it rest, and keep going back to it and working at it again and again, until it is completed as a finished work of art, until there is not a note too much or too little, not a bar you could improve upon. … I am rather lazy, but I never cool down over a work once begun, until it is perfected, unassailable.”

Here is one final letter Brahms wrote to Clara Schumann, scolding her for getting emotional after he left her home:

October 11, 1857: My dear Clara, you really must try hard to keep your melancholy within bounds and see that it does not last too long. Life is precious and such moods as the one you are in consume us body and soul. Do not imagine that life has little more in store for you . .. you must seriously try to alter, my dearest Clara . . . Passions are not natural to mankind, they are always exceptions. The man in whom they overstep the limits should regard himself as an invalid and seek a medicine for his life and for his health. The ideal and the genuine man is calm both in his joy and in his sorrow.

Many thanks to The Great Courses for their wonderful course on Brahms.

To learn more about Charlotte Mason’s living educational principles and how to apply them to music study, I hope you will consider purchasing my book, A Touch of the Infinite.